Moonlight Movies on the Beach We have posted our 2012 movie schedule! Check it out...

Alfredo's Beach Clubs "Moonlight Movies on the Beach",
brought to you by Charter Communications and
Long Beach Cinematheque

Movies are FREE and there is plenty of FREE PARKING. 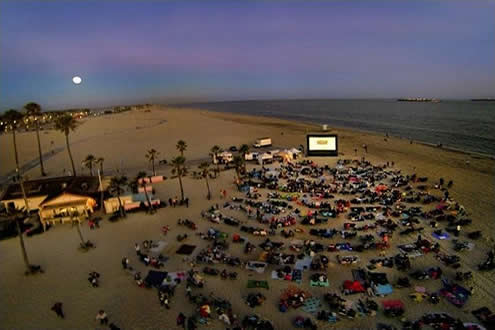 Unless Otherwise Noted, All Movies Will be Screened at:

Sunsets on The Beach - "Granada Beach"

MOONLIGHT MOVIES ON THE BEACH

A very large audience turned out Saturday for the opening of McBride Skatepark, a central city Redevelopment Agency project that got money from the legendary skater's foundation.

Tony Hawk
The Tony Hawk Foundation leader is interviewed at the grand opening of McBride Skateboard Park in Long Beach, to which his non-profit donated as much as $40,000 in equipment and support. Credit Mike Donelon

The Birdman landed in Long Beach Saturday, and the skaters who had only seen him on Tony Hawk video games were excited: he'd come to celebrate the opening of the city's newest skateboard park, for which his non-profit granted support. (The adults seemed surprised he was so approachable).

Hawk and some other skating and BMX bike stars were eagerly awaited for an exhibition at about 10:45 a.m. at McBride Skateboarding Park, for which the Tony Hawk Foundation has partnered with the non-profit ASK Long Beach youth advocacy group.

I’ve heard the outcry over the prohibition against footballs and Frisbees at Los Angeles County beaches as another example of government run amok. In fact, the intent of the ordinance was to increase recreational activities -something which has been lost in the media coverage.

There was a prohibition against footballs and Frisbees in the old ordinance from the 1970s. The updated ordinance does not ban footballs, soccer balls or Frisbees on beaches. Rather, it provides reasonable safety measures that lifeguards may impose on a crowded beach day, when wayward footballs or Frisbees could cause injuries to bystanders. The media reports also misrepresent violation fees.

As there have been so many inaccurate reports and confusion, I am asking our Director of Beaches and Harbors to come to our Board meeting on Tuesday to explain and clarify the ordinance. My goal is to ensure the safety of the 50-70 million beach-goers who visit the Los Angeles County beaches each year. I hear your concerns and will raise them on Tuesday.

LOS ANGELES (KTLA) -- The Los Angeles County Board of Supervisors agreed to raise fines up to $1,000 for throwing a football or Frisbee on any beach in the county.

A 37-page ordinance passed on Tuesday clarifies which beach activities are permissible and when.

The updated rules prohibit "any person to cast, toss, throw, kick or roll" anything other than a beach ball or volleyball during peak beach season -- between Memorial Day and Labor Day.

There are some exceptions for ball-throwing in pre-designated areas or when a person obtains a permit.

Additionally, playing water polo is allowed in the ocean.

The rules for ball-playing will be relaxed during the winter beach "off-season."

Officials say the rules are intended to prevent injuries to bystanders on busy summer days.

Another rule toward that end prohibits digging a hole deeper than 18 inches.

Exceptions can be granted for film and TV productions.