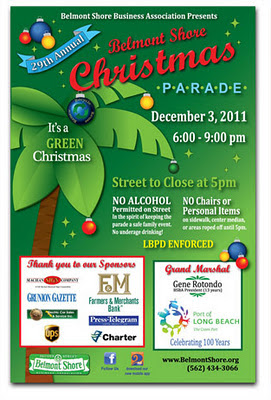 EverythingLongBeach recently spoke with John O’Kane, Publisher/Editor of AMASS Magazine, via email. They talked about inspirations, challenges and what’s it’s like having a business in All of Long Beach.

Tell us about AMASS Magazine. How long has it been in business?

It was founded in 1976 as an academic journal under another name, ENclitic. It has been non-academic since the 1990s.

The magazine is produced quarterly and distributed nationally through bookstores and newsstands, and in Europe and Asia as well. It also has many subscribers, especially libraries, both in the US and in other countries. The magazine is sold at an individual and institutional price outside of the harbor area. It is free in the harbor area and supported by local advertisers. The circulation, paid and free, totals 12,000. Most of this circulation is in Long Beach where we drop at about 200 sites.

We feature nationally known writers on issues of interest to the country at large that are political, economic and cultural. We also print articles on local issues, including restaurant and art reviews. And we also print fiction and an occasional poem. Our focus is libertarian and populist, as opposed to liberal or conservative, democratic or republican. Most of our advertisers are either non-political or conservative. But there’s no question we have a progressive slant. Our art and restaurant reviews tend to be focused around issues of community in Long Beach.

Our last issue, #41, was just released a few weeks ago. The cover and article attached highlight Williams Gym on Pine Ave. The next issue is due out in October. We would describe AMASS as a magazine for Long Beach and the Harbor area, as opposed to being strictly about these areas.

Why did you start AMASS Magazine?

I continued the magazine after being the editor in graduate school while completing my doctorate. My main interest and concern has always been in focussing on the issues of importance in our society.

What makes AMASS Magazine stand out?

It stands out because it prints articles about issues that no other publication does in the area. It is written in an accessible fashion and goes beyond conventional journalism. The articles are longer and more in depth. And it is free in the local area, but sold nationally and internationally.

What is the biggest success AMASS Magazine has had?

What is your favorite part of running your business?

Meeting local merchants and learning about their innovative ways to make a go of their businesses. We feel we are part of the Long Beach merchant family.

What are the biggest challenges you face?

The biggest challenge now is deciding how to expand in a climate where the economy is in a holding pattern.

What unique talents do you bring to AMASS Magazine?

I have a doctorate in the Humanities and a masters in the Social Sciences. I teach in the UC system and publish in national venues. Next book out in 6 weeks.

How is AMASS Magazine involved with the community?

Through advertising mostly, but also in tending to the the distribution at various sites and expanding them. Also, we have built a family of writers and visual artists.

Do you have any future plans for AMASS Magazine?

What is the best advice that you received and who did it come from?

One of our advertisers said to keep the magazine the way it is. Maintain the quality and substance and don’t go for the quick buck. The numbers will catch up eventually!

Tell us one last thing:

We are planning to start do public events after the next issue.

Email ThisBlogThis!Share to TwitterShare to FacebookShare to Pinterest
Labels: http://www.blogger.com/img/blank.gif

LONG BEACH, Nov. 11th// In solidarity with Occupy Wall Street, Occupiers from Los Angeles, Long Beach, and Pasadena will be Occupying the Blue and Red lines of the Metro on Saturday. They will be meeting at the 7th St. Metro station at 11:00 am. The group will march from the 7th St. & Figueroa Metro station to Pershing Square for a rally, teach-ins, entertainment and joint meetings from 11:30 am to 5:30 pm. If it is raining, the group will Occupy the Pershing Metro station. This event is both an opportunity to learn about why we need to get the influence of money out of politics and an opportunity for the Occupations to plan a larger coordinated event in one month to involve even more Occupations.

The day's planned speakers and events will include: James Devine of Loyola Marymount at 11:30 am, entertainment at 12 pm, Mary Beth of Move To Amend at 1 pm, Trina Ray from CA Clean Money Campaign at1:30 pm, a Theatre of the Oppressed workshop at 2:00 pm, joint committee meetings at 3:00 pm, and a combined General Assembly meeting at 4:30pm.
Occupy Los Angeles, Occupy Long Beach, and Occupy Pasadena are inviting the public to join in the Blue Meets Red event. It will be a chance to experience democracy and the Occupy movement first hand.
Find Occupy Long Beach at:occupylongbeach.webs.com
facebook.com/OccupyLongBeach
twitter.com/occupylongbeach

Note From the Owner, Lisa: Please come celebrate my birthday, this coming Monday November 14th!! Everyone is invited!! Food and drinks are on the house, but I will be asking you to make a donation to Memorial Hospital's Dancing for our Stars benefit, in which I am one of the dancers.

Come say hi and have dinner and stay for the dance party! Here is the link if you cannot attend but would like to donate:

Support Lisa at the Dancing for our Stars event!

See you soon at my 2nd home, 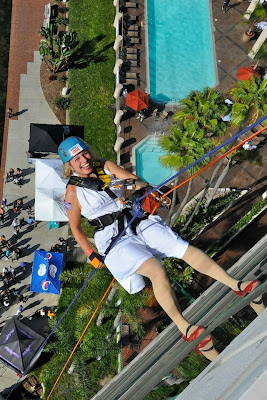 I did it. I actually did it! I rappelled 16 stories off of the Hyatt Regency Hotel in Downtown Long Beach, dressed as Marilyn Monroe! Would I do it again? Hell no!! But I did raise over $1200 for Special Olympics!
No comments:

LONG BEACH, Nov. 8th// The peaceful volunteers at Occupy Long Beach are asking for community support. With violent police interactions happening across the country, including cities such as Oakland and San Diego, the local movement is looking toward other models.

Occupy Orange County has been able to gain unanimous support from the city council in Irvine, CA. After spending 11 nights marching continuously between 10pm-6am, the occupiers at Irvine's City Hall are going to be able to set up camp. Their tents have been established as an expression of speech, and are protected under the First Amendment. In solidarity with the national movement, Occupy Orange County will be allowed to create public spaces that encourage political conversations 24 hours a day, 7 days a week.

Today, Occupy Long Beach is asking the City Council to allow permanent overnight use of Lincoln Park and to allow the use of tents and temporary structures within the park. The group is asking everyone to attend the City Council meeting on Tuesday, November 8th at 4:30pm. Anyone interested is invited to assemble before the meeting on the lawn of Lincoln park, which is located at City Hall, on Pacific Ave. between 1st and Broadway.