They are warriors. Normally, they are mothers, wives, project managers and teachers and accountants and baristas. But tonight, they are helmeted, speed-skating enforcers made out of elbows and scowls, flying around a banked track within inches of the wooden railings as raucous fans cheer for them to horrifically crash into each other. They’re tattooed and mini-skirted, thirsting for blood and then taking their opponents out for a beer. The whole scene is so very, well, Long Beach.

But while the action on the track is wild and loose, behind the scenes the Long Beach Roller Derby league has struggled to stay financially solvent and finds itself searching for a new place to play. Now, the city’s most eclectic sport is heading straight toward an elbow jab to the jaw, and is relying on its notoriously rabid fanbase for help with the 2012 season and beyond – a future that promises to be exciting if they’re able to skate over a few hurdles, first.

The league has paid off all debts from the 2011 season, but only after a fundraising campaign on KickStarter.com to raise $20,000. It took a stressful toll on organizers, not only because of the amount needed but especially because KickStarter drives are all or nothing. The LBRD needed to raise its full goal by January 20, or they wouldn’t be able to claim anything that had been pledged. It worked, and they raised $20,510 with help from 158 donors, but their home of two years would soon throw a curve ball that left the league searching for answers once again.

The LBRD played its first two seasons – a four-game trial in 2010 and a full season in 2011 – in the idyllic Spruce Goose Dome, a giant, criminally underused space with plenty of room and a high fun factor for fans. Then, when new management recently took over the dome, they asked LBRD to pay five times the rent that they had been paying. Understandably – and probably intentionally on the dome’s part – that was unfeasible, so LBRD finds itself without a home again.

“We’re back to square one,” says league organizer Blanche Deathereaux. “Playing in [the dome] was great, it’s an iconic space and most people have never been inside it. But what we were getting from it was not much.”

Not much at all, in fact. At the dome, the league was not taking any revenue from parking or concessions sales. Breaking ties might have been a tatted blessing in disguise, because the league hopes to find a permanent space that will allow them to increase revenue during the games.

But first, they’ll need to find a space big enough to house their banked track and their very well attended events. League organizer Anita Nother says they’ll need at least 10,000 square feet at about $0.30-0.50 per sq-ft, and they’re hoping to begin holding games by this March. With the date fast approaching, the stress and effort that comes with keeping this sport moving is a full-time job.

Almost all of the league’s stellar creative work – the gritty, sexy pinup posters and hot-selling calendars – are produced in-house by Diesel, while meetings are often held late at night and can take up the only free time in an already busy day. But they just keep pushing, making phone calls and looking for funding where they can. There’s a lot of sacrifice, but to each and all, it’s absolutely worth it.

“I just love the sport in general,” says Blanche, a former women’s water polo coach turned roller derby jammer/defender. “I don’t know what I would do without it, to be honest. I would just be at my job every day and be bored when I’m off work. It’s something that I love enough to enjoy the work.”

“Once you get a taste of things moving in the right direction and some minor success in it, there is no way I'd stop,” she says. “So maybe the energy just comes from feeling like we are so close to being truly successful and creating something better and more satisfying than what we were involved in before. I also feel I have an obligation to all the women who love it.”

Back on the homefront, the LBRD is hosting “Circus of the Scars” this Friday at Harvelles on 201 E. Broadway, promoted by possibly the dopest poster Diesel has created so far, to raise funds for the coming season. If they can simply get enough people into the crowd, the league is confident that they’ll find the necessary funding. For rollers like Nother who embraced the sport relatively late in life but are now addicted, keeping the LBRD going is a necessity for the future.

“I thought really, when I started, that I wouldn't be able to do it for very long,” she says. “But the longer I do it, the more I think I can probably do this for a bit. I hope to continue indefinitely.”

To reach out to the Long Beach Roller Derby, e-mail info@longbeachrollerderby.com or visit SaveLBRD.com. 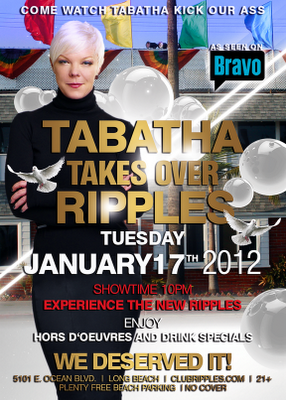 11:27am | Bravo channel's Tabatha Coffey, who filmed the premiere of her hit television show "Tabatha's Salon Takeover" at Ten Salon in Long Beach, returns to the City this season to take over Club Ripples for the second episode of her new series, "Tabatha Takes Over".

According to a press release:

Club Ripples, the first gay dance club in Long Beach, CA, is owned by couple Larry Hebert and John Garcia. Ripples used to be the gay hot spot, but now it’s empty seven nights a week and they blame the competition and their staff. Tabatha quickly discovers the real problems are John’s penny pinching business practices and Larry’s crazy club rules. To make matters worse, the bar has a bad reputation in the community and the employees’ suggestions are falling on deaf ears.

Similar in format to her original "Salon Takeover" series, “Tabatha Takes Over” follows Coffey as she travels across the country taking over failing establishments and "whipping them into shape" with her professional advice on everything from management style to marketing materials to customer service.

Long Beach's Club Ripples is featured on the second episode of the show, which will air January 17th at 10:00pm on Bravo.