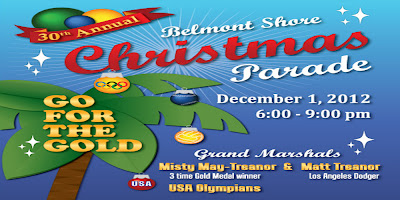 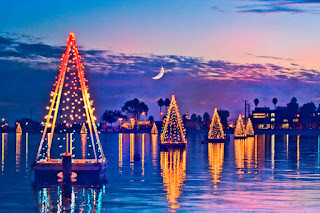 They will come on automatic every night at 5pm and shut off at 12midnight until a week after New Years.
No comments:

Democratic state Sen. Alan Lowenthal has defeated Republican Gary DeLong in the race for the Long Beach-to-western Orange County 47th Congressional District.
With 100 percent of precincts reporting, Lowenthal had 55.4 percent of the vote to DeLong's 44.6 percent, according to the California Secretary of State's Office.
Orange County precincts, which DeLong hoped would ease a path toward victory, have all been counted, leaving him with little hope of closing the gap.
Lowenthal, 71, will go to Congress after a 20-year political career that he began as a community organizer who won a seat on the Long Beach City Council and then, the Assembly.
"At each step I never thought I was going to move to somewhere else," Lowenthal said late Tuesday.
"I'm overwhelmed. I've tried really hard to represent my community. I think it will sink in tomorrow."
The 52-year-old DeLong, the owner of a telecommunications consulting firm, couldn't be reached for comment early Wednesday.
Political observers gave the Republican long odds in his quest to defeat Lowenthal for a new seat drawn during independent redistricting last year.
The district skews Democrat — at last count completed two weeks ago,

the party had 13.5 percent more voters than there are Republicans in the district, according to the Secretary of State. Lowenthal had other inherent advantages, such as strong union support, and a name that is synonymous with politics in southern Los Angeles County. Before entering politics, he was a psychology professor at Cal State Long Beach.
Still, DeLong, a moderate who is pro-choice and supports gay marriage, worried Democrats enough to warrant sharp attacks and attempts to

Gary DeLong, Republican candidate for the new 47th Congressional District, right, chats with Jim Emslie as they watch election results at the Long Beach Yacht Club on November 6, 2012. (Jeff Gritchen / Staff Photographer)
tie the Republican to far-right politicians in Washington. Former President Bill Clinton also dropped in to endorse Lowenthal and other Democratic congressional candidates at an event at UC Irvine. DeLong was also a prodigious fundraiser, collecting $1.3 million during the election cycle, while Lowenthal, despite his political leg up on his rival, was behind, gathering almost $980,000.
In a closely-watched campaign where both sides often howled behind the scenes about the misdeeds and misrepresentations of their opponent, it was DeLong who attracted the most public attention when he was videotaped at a Rossmoor Homeowners Association event saying he did not see scientific evidence of climate change.
He later issued a statement that said climate change is influenced by man and natural conditions. His campaign claimed the recorded comments were taken out of context.
On the campaign trail, DeLong held traditional fiscal conservative views but didn't rule out raising taxes if all other approaches had been exhausted.
Lowenthal has endorsed President Barack Obama's agenda, including the Affordable Care Act and the American Jobs Act, and also supports environmentally-friendly policies and upgrades to the educations system, such as expanding the role of community colleges.
A close-run and occasionally nasty campaign was true to its tone Tuesday, when Lowenthal fired a campaign staffer who allegedly stole DeLong signs in Stanton.
The episode caused Lowenthal to issue an unusual Election Day statement disavowing the action.
"This incident does not reflect on my values for how campaigns should be conducted," said Lowenthal.
The night began on a hopeful note for DeLong supporters, who cheered when their candidate was ahead in the first returns from a watch party at the Long Beach Yacht Club.
At the end of the night, though, it was Lowenthal backers who celebrated their candidate's victory — and President Barack Obama's re-election — at La Traviata downtown.
"It was an emphatically great night," said Andy Kincaid of Long Beach.
"Now the tough stuff comes because you have to form a new governing coalition."
Kincaid suggested, considering the partisan gap dividing the two parties after a bruising election year, that Democrats approach that task "with humility."
eric.bradley@presstelegram.com, 562-714-2104, twitter.com/EricBradleyPT
http://www.presstelegram.com/elections/ci_21944401/long-beach-47th-congressional-district-delong-lowenthal-dead?source=rss
No comments:

It is Election Day!! FREE Cab Rides to Polls - use code 'LA Vote'!

It's Election Day! The polls are open...

To find your polling place in Los Angeles County: http://www.lavote.net/

To find your polling place in Orange County: http://bos.ocgov.com/pollfind/index.asp

Please tell your friends, family, and neighbors to get out and vote!

Free cab rides to the polls! Remember to use the code "LA Vote"!