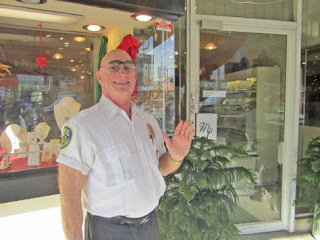 Editor’s Note: There are some unique careers — and some unique people who do them — to keep the bills paid. This series highlights some of Long Beach’s hard workers trying to complete a day’s work.
Anyone who spends time on Second Street in Belmont Shore knows Jim Gorsuch — maybe not by name, but by the sight of his friendly smile, wave and nod.
Gorsuch, 63, is the security man posted three days a week outside McCarty’s Jewelry in Belmont Shore. His employer is Universal Protection Service, which has an office in downtown Long Beach.
A Seal Beach resident originally from Maryland, Gorsuch started working for Universal in 1991 and has been stationed at McCarty’s since 2009. He had no background in security, but went through a training process with the company and demonstrated the friendliness and customer service the job requires.
Gorsuch said 80% of his job is customer service and about 20% is making security reports about things happening at the jewelry store or on Second Street. His job is to be on the lookout for potential safety and security issues.
“I keep an eye on things,” Gorsuch puts it simply.
The best part of his job, Gorsuch said, is meeting people on the popular Second Street thoroughfare. He said he sees the same people walking their dogs or pushing strollers on the street more than once a day. He says hello to everyone.
“I especially like to say hello to the little ones,” Gorsuch said. “They don’t quite understand what I do — they often ask me if I am a policeman. Sometimes I help lost people find a store they are looking for. I try to be friendly and helpful… I make it a point to say hello to everyone because I respect everyone, and I like doing it. If someone is having a bad day, they just pass by, but I get a lot of people waving back.”
Positioned on the sunny side of the street, under McCarty’s red awning, Gorsuch always wears eyeglasses with pop-up shades, and he has a chair to sit on when his feet need a rest. He said the activity on the street most days is quiet, and for a semi-retired guy the job is a perfect excuse to get out of the house and earn some extra income. He added that he lives vicariously through the tourists and others on the street.
His presence in Belmont Shore hasn’t gone unnoticed. Employees at McCarty’s and those at Universal Protection Service praise Gorsuch’s reliability and friendliness. Also, more than 150 people have “liked” a post about the man and more than 60 have made positive comments about him on the I Love Belmont Shore Facebook page.
Facebook users wrote some of the following comments about Gorsuch: “Nicest guy on 2nd Street;” “He is awesome. Always pets my dogs;” “He deserves a bonus;” and “His greeting lights up the day.”
Karen Remijan, McCarty’s creative director, said Gorsuch has been a great asset to the business.
“If Jim isn’t out there, we get people coming in and asking about him,” she said. “Everyone loves him.”

The New Cal Shabu on 2nd st. Next to Legends in Long Beach


it was Good & Healthy....However.....they didn`t instruct us very well - they gave us raw meat with no utensils except our eating ones and no plate but what the raw meat was on - so lots of cross contamination - then you are suppose to cook the food then eat it as next is cooking - fine if you don`t mind burning your mouth cause the food is to damn hot and fishing for your cooked food in the boiling water - It was their 1st Friday being open - So all good - **** My advice: ask for extra utensils, extra plates, soup bowl up front, cook everything up at once, when all cooked, put on fresh plates/bowls, and eat as it all cools down...take home the left overs.....cause there will be left overs, at the end there is a lot of soup broth left over. The Staff was very friendly and the Place was very steamy, great for your pores! http://www.californiashabushabu.com/
No comments: